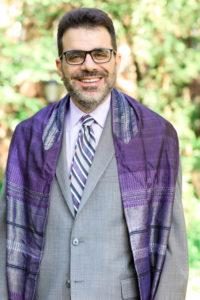 Rabbi Mark Kaiserman became the rabbi of Reform Temple of Forest Hills in July 2013 returning to his childhood New York City and becoming part of this dynamic synagogue community.

Originally from Brooklyn, New York, Rabbi Kaiserman received a B.A. in English Literature and Judaic Studies from Binghamton University.  He earned his M.A. in Hebrew Letters in 1996 and his rabbinic ordination from the Hebrew Union College – Jewish Institute of Religion’s Cincinnati campus in 1997.

Working with all ages, Rabbi Kaiserman has especially focused on connecting with youth in both formal and informal settings. He volunteers most summers at the URJ 6 Points Sci-Tech Academy. He has been honored with Youth Worker of the Month by RJYouthworker and for his work with NFTY’s Texas/Oklahoma Region and the URJ Greene Family Camp.

With a childhood love for acting, he has co-written numerous popular Purim shpiels for all ages adapting the music from shows such as The Sound of Music, Grease, Fiddler on the Roof, The Wizard of Oz, and a Disney Show compilation.

Interfaith work has been a concentration throughout Rabbi Kaiserman’s career serving on the Forest Hills Interfaith Clergy Association. He works regularly with social justice organizations to help us all make a better world. He also is an active volunteer in the Central Conference of American Rabbis and his alma mater, the Hebrew Union College, currently serving on the CCAR Ethics Committee.  He is currently studying at HUC-JIR part-time in The Interfaith Doctor of Ministry Program for Education in Pastoral Care expecting to receive his Doctorate in 2023.

He is an amateur film buff and a diehard New York Mets fan. He loves to travel and has been to all 50 U.S. states and to a baseball game at every Major League Stadium.